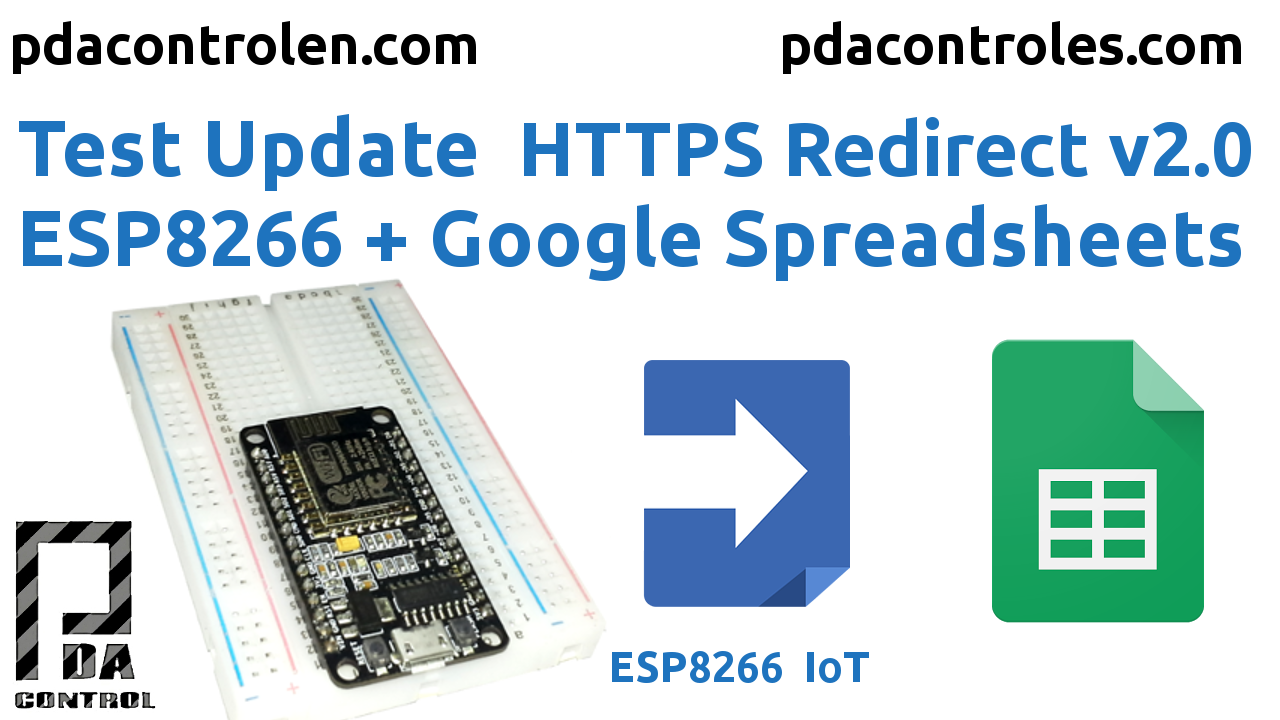 In previous tests we made the communication of an ESP8266 module and bidirectional sending of data to a Google Sheet  with the help of Google Script, Initially thanks to Sujay Phadke “electronicsguy” the creator of the HTTPSRedirect library, a few months ago I made considerable improvements to said library and we will do a quick test. The integration process between ESP8266 and Google Docs has not changed.

Among the improvements, allows connections with Google Sheets, Calendar, Drive, have improved performance to see detailed improvements in the following link.

In our case we will only make the connection with the Google sheet and we will prove the creation of the fingerprint. The use of the library has some conditions of use mentioned by the creator to take into account mentioned at the end of the README github.

In our Google Drive we create a folder and create a new Google Script or .gs file and paste the code, compile and execute it.

Add Sheet ID and I have made the modification line 38 ‘Sheet1’ for ‘Hoja  1’ in my case my drive is in Spanish.

In our Google Drive we create a new Google Spreadsheets file, copy ID from URL. The creator of the library explains in case of Linux, Windows and MAC OS here in SSL Certificates,in this case we will test the method of generating the fingerprint for Windows and Linux, for MAC it is similar to Windows.

Simply open a terminal and make the openssl request, full explanation in the video below.

Windows
It requires downloading the gnuwin32-openssl binary and executing the fingerprint.bat file and executing it in the bin folder, full explanation in the video below.

Note: In case of not working I recommend installing and configuring a Virtual machine with linux in Virtualbox is very easy Add URL to execute Google Script file or .gs, Network credentials and to generate the fingerprint Other tests with the Previous Version HTTPSRedirect 1.0

Here is a count of some tests performed with the previous version of HTTPSRedirect:

It was the first test, with a complete explanation of the configuration and connection process.

A test was performed to activate outputs. Send temperature measurement and registration in a data sheet in Google Docs.

In this case, a modification was made to the ESP8266 code by adding a routine as a Modbus RTU RS232 slave for communication with a Panasonic Fpx PLC.

In this case we added a method with the ESP8266 send parameters and from Google Script and Google Spreadsheets allow to send an email from gmail.

Even if I do not perform a complete test with all the new improvements in the application such as the connection with Calendar, Drive I see that the bidirectional connection works perfectly.

Some time ago it was suggested to the developer to implement a means of capturing the values from the cells in ESP8266, I indicate that in future versions, I will verify if it was implemented, it would be very useful since previously only cell values could be displayed in the terminal .

Read the considerations of use of the library in Github, its use is free non-commercial.

To conclude thanks to the developer Sujay Phadke “electronicsguy “for his contribution and share its implementation, I have seen that people perform tests and never thanks or provides credit to the creators.