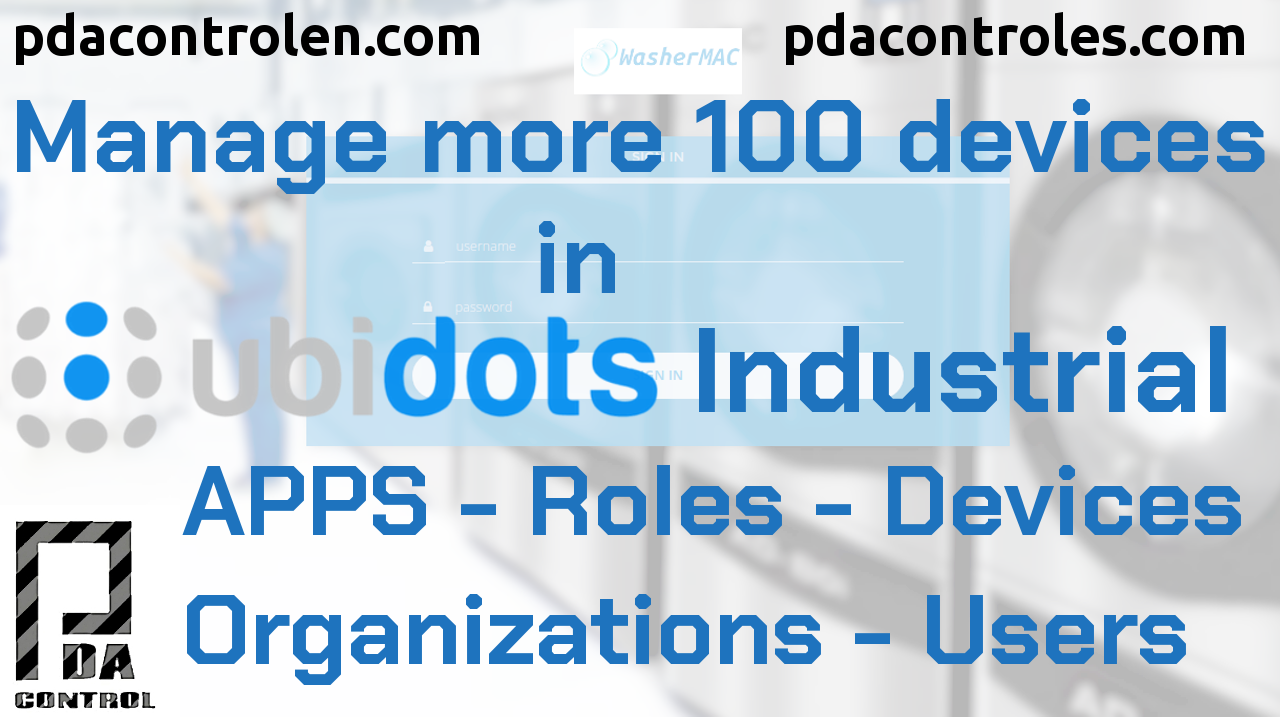 In this opportunity I have decided to test the practicality of the IoT platform Ubidots for user management in the case that it has many devices for several organizations or companies under the same Ubidots platform.﻿

In previous tutorials we made the creation of a device configuration and design of a dashboard.

In previous tests we have only added a device but this time we will analyze how to manage and configure 107 independent devices.

This WahserMAC laundry has implemented the Ubidots platform to monitor some of its machines specifically its smart washers and dryers as it provides a 24hr wash service.

The Ubidots platform would facilitate the analysis of operation, planning for preventive maintenance, analysis of consumption of resources such as electricity, hot water, cold water and steam.

The main need is to analyze the mechanical wear of the washers and dryers since the mechanical components have a life cycle in some cases indeterminable in a traditional way.

Dashboards for each Headquarters

It has been previously designed 4 dashboards each for each site, collecting the information of the washing machines and dryers.

As mentioned above we have a total of 108 devices connected to our Ubidots platform, each device sends 4 variables, for a total of 432 variables.

The variables are sent to ubidots when starting during and at the end of the operation period.

Specification of connected devices and variables

From the Ubidots Industrial account, I will configure the entire application.

In the case of the WasherMAC laundry, 4 organizations have been created given that although they are only one organization, it has been decided to administer them individually by headquarters:

Roles are permissions granted to users for the use of Ubidots functionalities such as visualization, editing, creation and elimination of features such as Dashboards, users, roles, widgets, variables and events. The default platform has predefined roles but we will create a new role for maintenance personnel.

We will initially create 5 users, some with permissions on the 4 organizations, some only on an organization depending on their functions in the final company.

Ubidots has a customization layer for end customers, in my case the “WasherMAC” laundry.

Technically, it allows creating another account for the clients derived from the administrator’s version, allowing multiple clients each with their own final platform.

Exalt the ease of management of organizations, roles, users and devices these features makes Ubidots a good option to manage large amounts of devices from an account.

The customization layer is good, with features that will allow the end user to take ownership of the platform’s functionalities.

I think the configuration of the roles is perfect given that if you allow total management of the Ubidots functionalities.