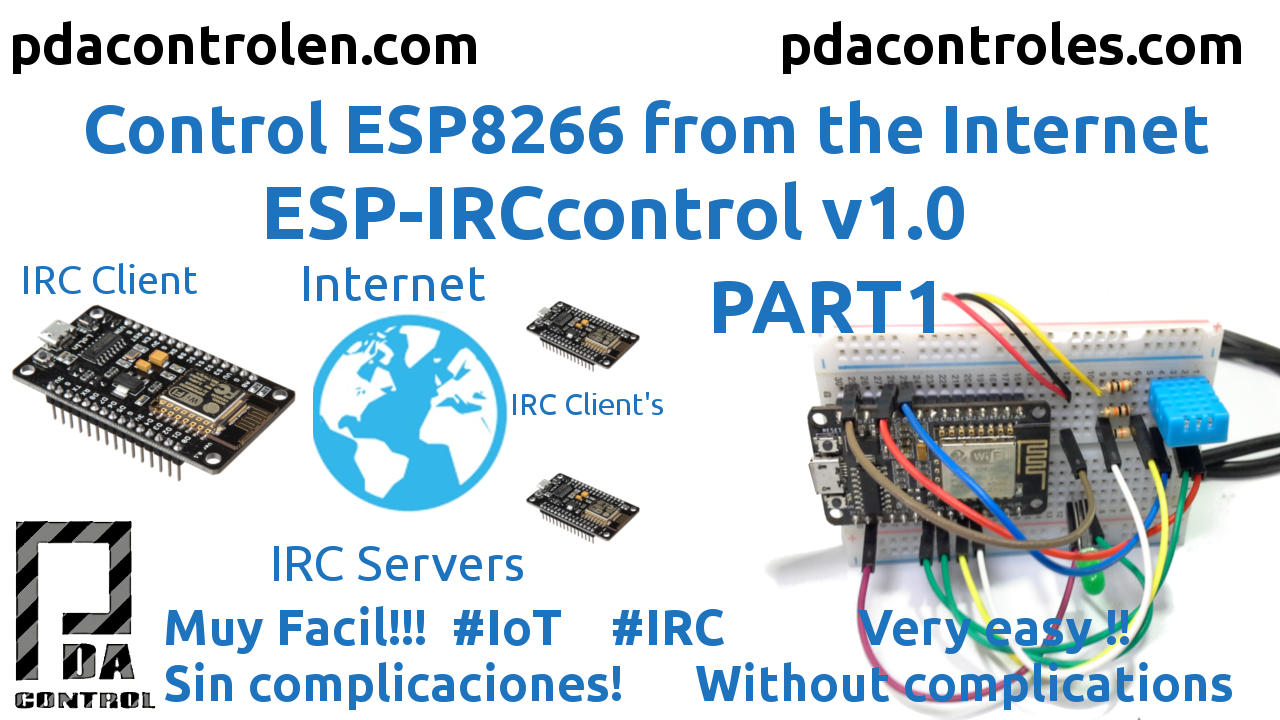 How many times have we not looked for a simple way to communicate with our devices through the Internet without complications and / or complex intermediary applications, DNS, IP addresses or VPN’s.

Many times I have been asked how to turn on a led, relay or view a temperature from the Internet in an easy way, here a possible answer.

For a long time I had in mind this application to control or interact an ESP8266 from the Internet using the existing IRC servers, it only requires 3 things an available IRC server, nickname and channel.

Is IRC (INTERNET RELAY CHAT)  is a transmission protocol (TCP/IP), which handles chats and asynchronous communication, chats can be in large groups of users or even one by one.

IRC exists since 1988, although currently it is not as popular as it was a few years ago but there are still many active groups, generally free software discussion communities, IRC servers are active, current and public.

IRC can implement Transport Layer Security (TLS) or Secure Sockets Layer (SSL) to encrypt data between users, it also allows file sending. Most messages sent between an IRC client and the IRC server are sent in plain text.

Technically, IRC is a protocol that allows sending messages to one or many users, using commands for certain actions, such as “PRIVMSG” to send a message to a channel / group or user.

You could say that creating an IRC client is very simple, technically make connections with a server for a certain port, send and receive messages, for some time I have done tests with esp8266 as an IRC client, I have made some improvements to the initial tests presented in previous tutorials.

To guarantee the existence or connection of the clients the IRC Server continuously sends “PING” to the client in this case ESP8266 would respond “PONG” indicating that it is still active in the channel, this verification is done automatically by our application.

The application has been created to work Answer by request, the ESP8266 will only respond under requests / commands or messages from external clients, it is preferred to avoid constant sending of data without being requested, bombing or perhaps blocking of IRC servers. Below I will list some of the features of the irc application implemented in an ESP8266, the main functions of Monitoring and Control, some commands have been created, which allow to request values, states or data from the esp8266:

Control of any Gpio output

Nickname esp8266 Default: ESP8266IRCXXXXXX, the last 6 characters will always be the MAC.

Example 2: Although the esp performs the actions only by request, periodically the esp can send messages     such as the web page information.

Note: commands can be sent in uppercase or lowercase letters.

WEB Client has been enabled for your IRC tests, Test right now !!! in 4 steps it controls an ESP8266 from here IRC CLIENT WEB. Well since the messages or in this case commands are group or massive, anyone could send a command and control the ESP8266, example activate an exit, a method has been implemented to limit the control for the users, in an array the users will be entered allowed to control the ESP8266.

ENABLE_USERPERMITTED = 0: ESP8266 receives commands from any user who has entered the same channel, nothing sure.

It allows sending messages and / or commands directly or privately to ESP8266 if the group / channel publicly displays the command, but for now the ESP8266 will publicly respond to another point to improve.

Another of the functions to be implemented is the interactivity, there are certain pre-configured messages in the ESP8266, the idea is to be able to ask very basic questions to the esp6266, example how is the climate ?, currently in tests, not available in this version. There are specialized IoT Platforms, It could be said that IRC is the simplest and Bidirectional communication method that you will find to communicate your ESP8266 from anywhere.

Personally I think the application is very simple and given that feature is functional for simple tests.

I have not done tests on a large scale, It is a basic application, Warning although the connection is technically continuous server-client, could give the situation that the messages are delayed, I recommend not to realize very complex control applications, “the control of the nuclear reactor “.

For now, the routine that only allows certain users to control esp8266.

Create users or Nicknames with alphanumeric combinations maximum 10 characters, in the specific case of ESP8266 uses part of the MAC in your Nickname.

Again, I caution against using already existing IRC Groups or Channels to avoid complications, since it would be uncomfortable to send messages to channels of existing organizations or projects.

Although it is a public service, I have not found detailed restrictions for the use of the service, of course I recommend a prudent use for sending data, remember that they are servers, fortunately the implementation ESP8266 is response by request.

Technicall your application could be compared with the so-called IRCBots

Some improvements are planned, which are in process: